|
NOW TAKING ORDERS. RESERVE A MCLAREN 675LT.
|
Experience the raw adrenaline of the McLaren 675LT, the lightest, most driver-focused, most exclusive series-production McLaren supercar ever built.
The 1997 McLaren F1 GTR ‘Longtail’ was the ultimate evolution of the Le Mans-winning F1 GTR. Almost two decades on, the limited-edition 675LT follows its uncompromising ethos to create a visceral driving experience of unique intensity. More power, less weight, more precision – nothing has escaped our attention in the quest for perfection on both road and track.

Inspired by the McLaren F1 GTR ‘Longtail’, the 675LT features striking carbon fibre bodywork that increases downforce by an astonishing 40 percent over any other model in the Super Series.

The carbon fibre MonoCell provides the 675LT with an unrivalled combination of lightness, safety and stiffness, in common with all models in the McLaren Super Series. But an obsessive weight-saving strategy unlocks a further 100kg reduction compared with the 650S. From lightweight carbon fibre racing seats to a 1mm thinner windscreen, no opportunity to save weight has been overlooked.

A Short History Of The Longtail

The Le Mans racer that pushed the possible to the limit – and inspires the new 675LT.

In 1995, we made history by beating purpose-built sports prototypes to victory at the 24 Hours of Le Mans with the road car-based McLaren F1 GTR. Then, in 1997, we unleashed the F1 GTR ‘Longtail’, a car whose innovations pushed physical boundaries and technical regulations to the absolute limit. Not only does the exterior design of the 675LT create maximum visual impact, but it also helps unleash its staggering performance. The race-inspired front splitter is now 80 percent larger and the distinctive rear ‘Longtail’ Airbrake’s aspect ratio increased by some 50 percent; both additions help increase downforce by an incredible 40 percent compared with the already efficient 650S. The unprecedented use of carbon fibre for a car in this class – including both new bumpers, and the entirely redesigned rear fenders and rear deck – also contributes to a substantial 100kg overall weight saving; a 1230kg dry weight makes the 675LT lighter than all class competitors, and gives an astonishing power-to-weight ratio of 549PS per tonne.

Inside, the performance-focused, weight-optimised design continues. Carpet has been removed revealing the carbon fibre MonoCell at the heart of the 675LT. Comfortable yet purposeful racing seats save 15kg, while larger rocker shift gear controls inspired by the McLaren P1™ underline the performance credentials of the 675LT.

Optimised 675LT weighs 1230kg – 100kg less than the lightweight 650S, +40% aerodynamic enhancements bring a new level of downforce to the McLaren Super Series, obsessive attention to detail resulted in thinner glass, saving over 3kg... In a McLaren, nothing is superfluous. The stunning design of the 675LT satisfies the most demanding of engineering requirements, minimising drag, optimising downforce and enhancing cooling wherever possible. The fact that it looks unbelievably exciting at a standstill is a rewarding by-product of this approach. 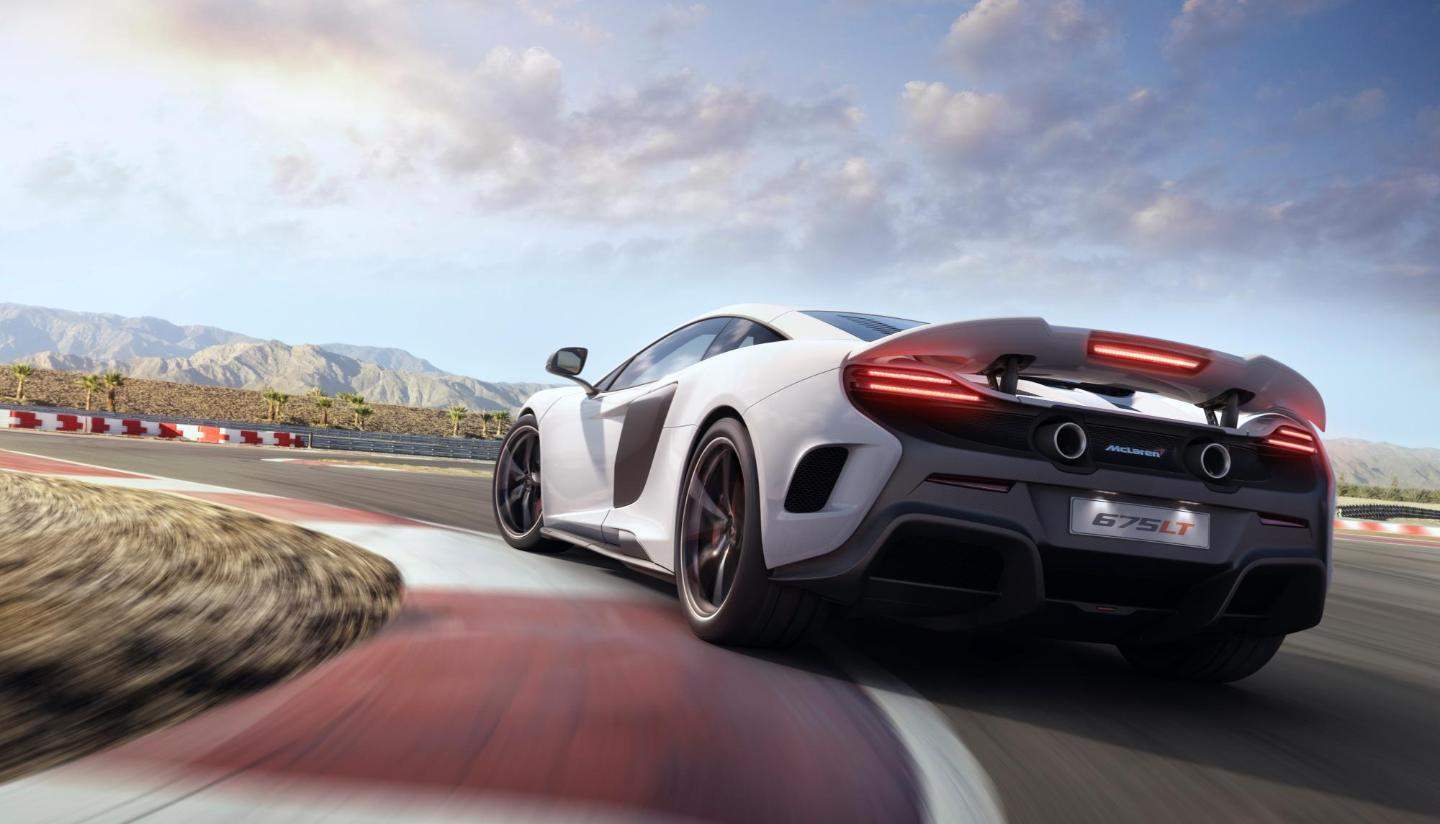 We have over 50 years of success on the racetrack, and those decades of expertise feed directly into all our road cars. The 675LT is no exception. Inspired by the 1997 McLaren F1 GTR ‘Longtail’, it deploys motorsport-developed technology to create the most extreme driving experience of any McLaren series-production supercar.

The 675LT has been extensively optimised within the in-house wind tunnel at the McLaren Technology Centre, an astonishingly potent race-proven engine produces 675PS (666bhp) and 700Nm (516lb ft), and the suspension system has been engineered for even sharper responses.

The process might be grounded in hard data, but the result is more engagement, more raw emotion and more mind-blowing performance. The McLaren 675LT propels driving enjoyment to an entirely new dimension.